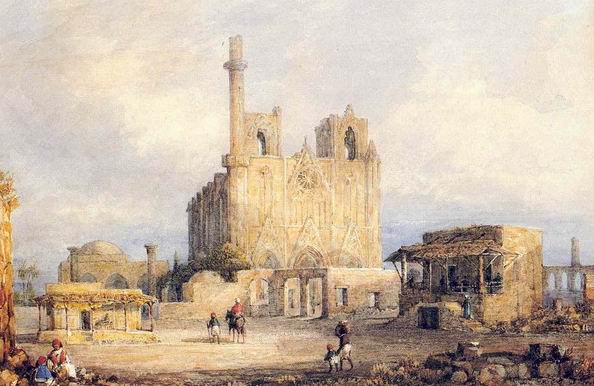 Cyprus has had a troubled history. The abundance of copper, timber and the strategic location between East and West resulted in repeated invasions, changes of rulers, and strife for the inhabitants.

Before the annexation to Rome in 58 B.C. Phoenicians, Archaeans, Assyrians, Egyptians, Persians, and Greeks colonized Cyprus.In 43 A.D. Christianity came to Cyprus and in 330 A.D.Cyprus became part of the Eastern Roman or Byzantine Empire. And so it remained until 1191 when Richard the Lionheart, on his way to the Holy Land to fight the 3rd Crusade, conquered the island.

1489 the Lusignan King James died leaving the Kingdom to his Venetian wife who abdicated giving the island to Venice. The Venetians saw Cyprus primarily as a military base and built fortifications all over the island. Cypriots, at that time, were seen merely as a populous to be taxed as much as possible. In fact, it is said that Venetian rule was so unpleasant that when the Ottomans arrived in Cyprus in 571 the locals felt as if they had been liberated from slavery.
The Ottomans abolished serfdom and instated the Orthodox Church as the Church, of Cyprus. They also made being Catholic a punishable offense, so Cypriots had to choose between Orthodox Christianity and Islam. The majority chose Christianity, but the result was that the population began to take on the ethnic structure it still possesses today, namely Greek and Turkish.

The Ottoman Empire entering the First World War on the side of Germany and emerged defeated, partly occupied by foreign powers, and with harsh restrictions imposed, Cyprus became a part of the British colonies, following the Treaty of Lausanne in 1925.
1960 the Treaty of Zurich was signed to give independence to Cyprus whilst protecting the rights of the Turkish Cypriot population. The guarantors of this treaty were Britain, Greece, and Turkey.

1963 relations between the two communities separated by language, culture and religion, had deteriorated. 13 articles of the Constitution were attempted to be changed in favor of Greek Cypriot community, also disarming Turkish Cypriot Police and establishing the National Greek Cypriot Guards. These measures were in clear contravention of the Treaty of Zurich. Civil war began, and the United Nations sent in troops in an attempt to restore peace, creating the Green Line, which effectively divided the communities.
1974 Greece attempted a military coup in conjunction with the Greek National Guard in a bid to achieve ENOSIS (Idea of union with Greece).

On the 20th July 1974, Turkey, after consultation with Britain, intervened military, namely Peace-Keeping Action to protect the Turkish Cypriot community. This was in exercise of the powers of guarantee agreed in the Treaty of Zurich.

Since this time the island has remained divided. On the 15th November 1983 The Turkish Republic of Northern Cyprus was founded. It is a fully democratic state and with exception of a few border incidents, internal peace has been established.