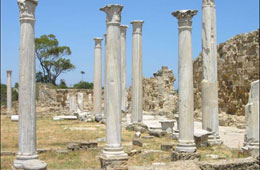 Our island has a rich heritage which is full of peerless architecture. Soli and Vuni, Arap Ahmet Mosque, Salamis Ruins, Aphostolos Andreas Manastry, etc… You may encounter with the marks of the civilization of 9000 years all around the island.

However, there were some major problems between two different societies, hence, on 1974 there was a war between them, and the island divided into two parts. Finally, on 1983 TRNC was established.